How much capital for renewables is likely to be deployed going
forward, and where will it come from?

Wood Mackenzie estimates that the combined global capex spend on
wind and solar projects will range from around $165 billion to $190
billion a year between 2020 and 2035. That calculation is based on
realistic growth scenarios, and project development at a global
average cost of around $1.00 per watt for onshore wind and
solar. 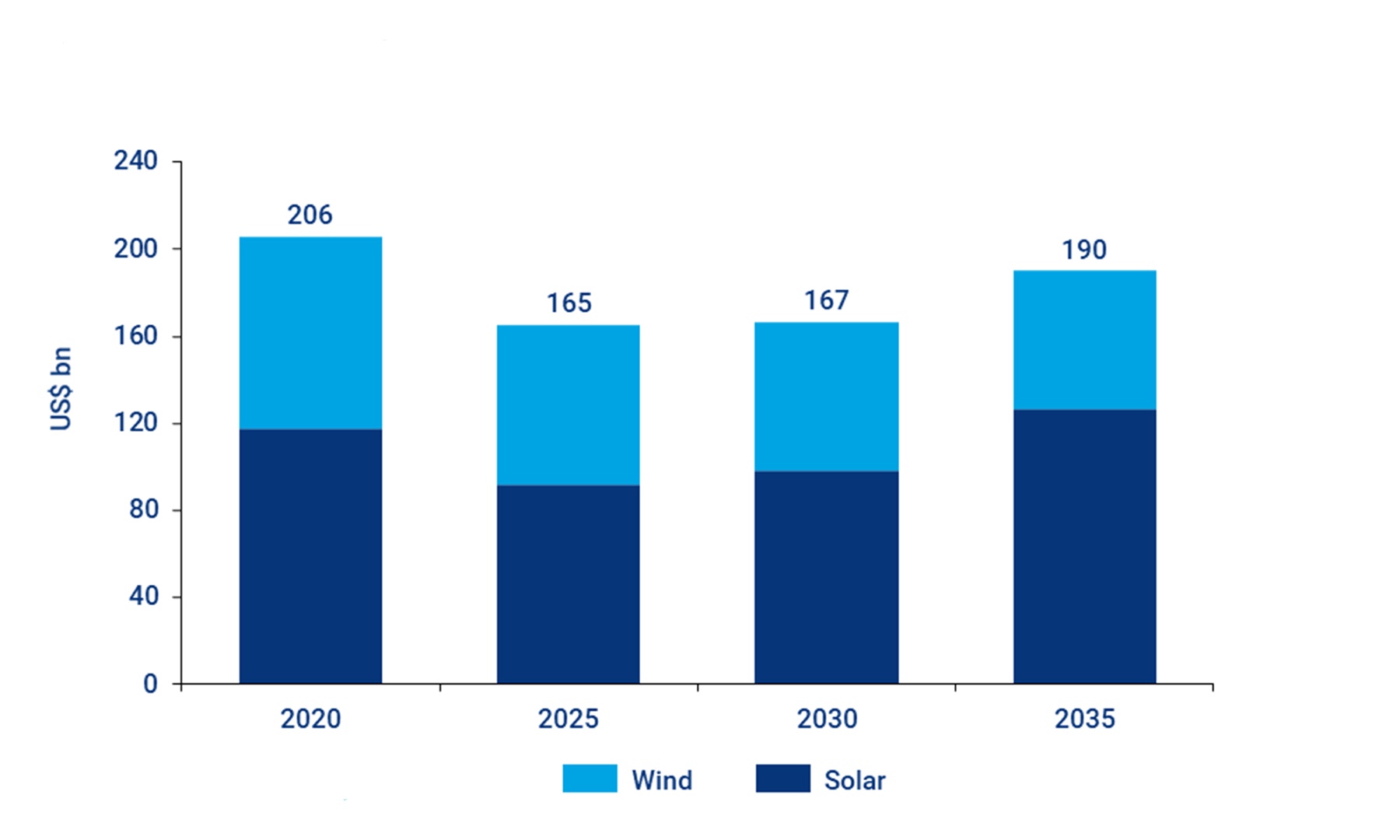 There are significant variations in project development costs by
country, as shared in a recent Wood Mackenzie
presentation on the topic in Paris.

For example, solar projects can be developed for $0.40 per watt
in Spain or Portugal, compared to $1.50 per watt in Japan. However,
the global average is around $1.00 per watt for onshore wind and
solar, and $2.00 per watt for offshore wind. This translates to
capital deployment of around $190 billion in 2019.

Over the short-term, this will decline slightly, to $160 billion
by 2025. This is due to the combined impact of policy changes
around the world and ongoing reductions in equipment costs.

One way to quickly evaluate risk is to consider debt financing
and leverage rates available from large banks.

An onshore wind or utility-scale solar PV project can currently
be financed with 75-85 percent of leverage at 100-130 basis points
over LIBOR (for investments in BBB credit-rated countries). This is
very close to the lending rate a large bank would provide for a
highway or an airport.

So in many cases, these assets are bankable, investable, and
considered to be comparable to other high-quality investment
opportunities on the risk-return curve.

What type of firms will deploy capital in
renewables?

Due to the de-risked nature of wind and solar power generation
as an asset class, unlisted and listed funds currently deploy
around 45 percent of the $190 billion spend.

Utilities, legacy players in the power generation value chain,
come next with roughly 25 percent of the annual spend. Pension
funds and oil and gas companies, relative newcomers to this asset
class, deploy 3-6 percent each.

The fragmented nature of utility-scale development in many
countries, such as Germany, Netherlands and parts of Spain, means
that small developers also maintain a meaningful share (18
percent).

Figure: Sources of capital deployed in renewables in
2019 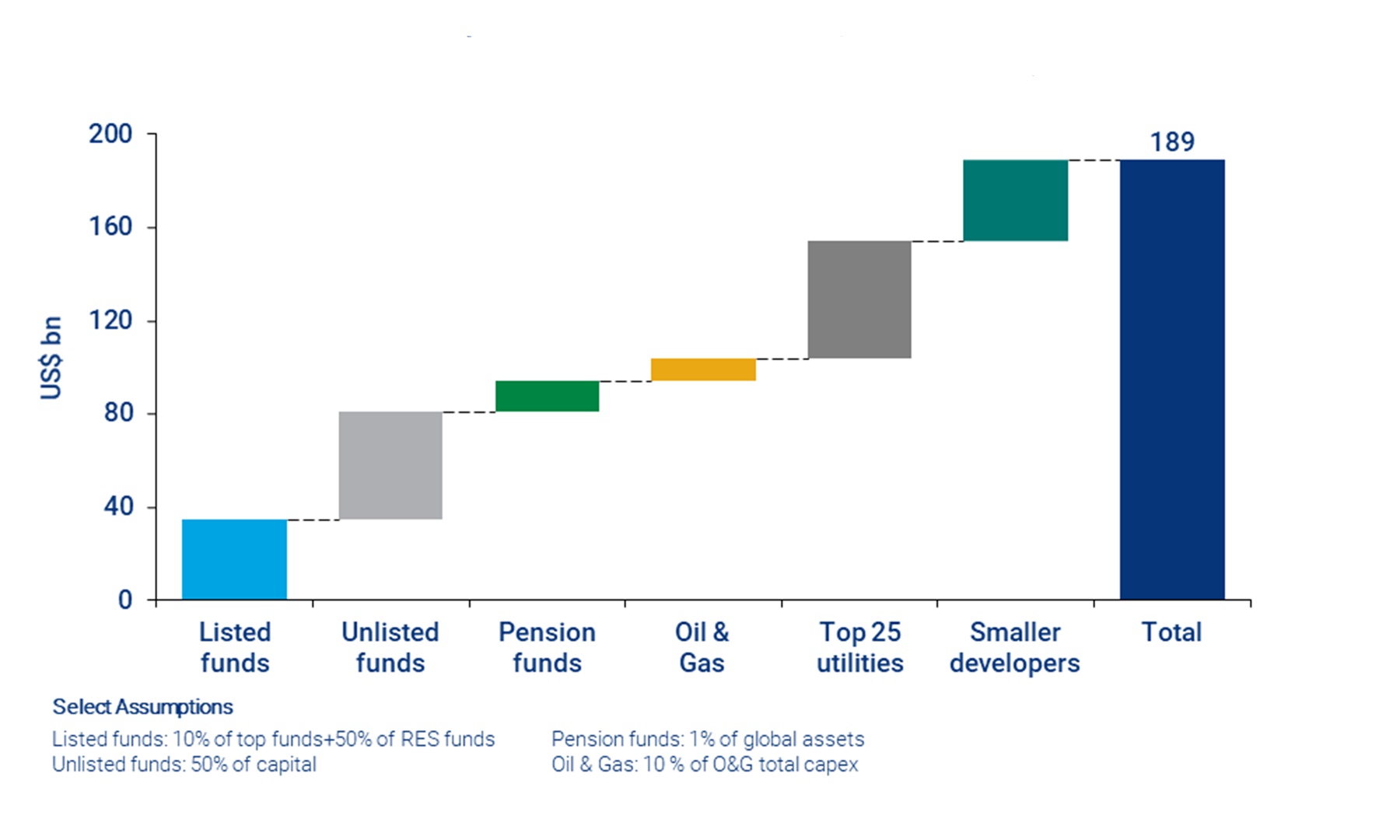 How will this change over time?

A significant share of capacity (100-120 gigawatts out of 170
gigawatts) is still expected to be awarded under fixed remuneration
auctions through 2030. The role of passive and low-WACC investors,
such as pension funds, is likely to increase over the long term as
a result.

Even a 1 percent increase in pension capital could provide an
additional $15-20 billion for renewable energy projects. As
countries scale their auction plans, small developers are likely to
consolidate their portfolios. Their share would decline.

Large oil and gas companies, eager to join the energy
transition, are likely to increase their allocation to 10-15
percent of their annual capex plans. Galp Energia, for example,
made this commitment in October 2019.

Oil and gas players are also likely to have the appetite to
pursue higher-risk opportunities to meet shareholder return
targets. This might include emerging market project development,
distributed generation and behind-the-meter generation.

Utilities will likely maintain their share at 25 percent. It
remains to be seen whether large utilities will spread their capex
across a variety of opportunities or focus on specific technologies
or activities.

Ongoing transformation plans of prominent utilities suggest that
there is no one-size-fits-all model. Many are trying to focus on
niches that capitalize on their unique competitive advantages.

The impact of ‘merchant’ models

A move from fixed remuneration to merchant models would expose
assets to power price volatility. Passive sources of capital would
find it more difficult to deploy capital in fully-merchant or
unhedged projects.

However, over the next five to ten years new hedging instruments
are likely to become more robust and liquid, allowing asset owners
to continue to deploy capital in a flexible way. So the transition
to merchant assets is a short-term headwind for an asset class with
a long-term tailwind.

The emissions story: A grim outlook

The capex pool expected to emerge from the power generation
sector might seem significant. But $165-190 billion per year for
wind and solar does not bring the world close to the 2-degree
target agreed upon in Paris in 2015.

Hypothetically, to swap the world’s entire coal power plant
fleet by 2030 would require an additional spend of $200 billion a
year. This (highly optimistic) scenario would significantly step up
efforts towards a cleaner and emissions-free world, but would only
contribute an additional 13 percent toward the global Paris target
(including non-power sector emissions).

These calculations focus only on renewable energy generation.
The other side of the story is the additional investment needed in
transmission, energy storage and other areas that complement growth
in renewables. If the U.S. market is an example, investment
requirement could more than double, depending on the technology
choices made.

Source: FS – GreenTech Media
Who Will Fund the Renewables Boom of the Next 15 Years?