In December, we published a list of the
top 10 utility regulation trends of 2019. With 2020 now past
the halfway point, we check in on the top public utility commission
(PUC) actions and trends so far this year.

For the first time, we are including in our top 10 list a key
trend in federal regulation of wholesale electricity markets, as it
goes to the question of who is in charge of energy policy in a
changing electricity landscape.

Below is an executive summary of the complete roundup, which has
specific examples of state PUC action. (You can read AEE’s
full version here.)

Back in March, when the public health lockdowns were just
beginning, AEE wrote a
COVID-inspired acrostic&#2013266080;poem giving a quick overview of the way
the virus was starting to rear its head in PUC dockets around the
country. Five months on, from everyday life to everyday dockets,
COVID has managed to infuse everything, making it impossible to
talk about anything from rate cases to utility program budgets to
how to hold a hearing without considering the impact from
COVID.

A slew of state commissions have put
disconnection moratoria into effect. Several states are using
dockets to think about how to sustain economic development,
including clean energy projects, amid COVID. For example, in April,
the New York PSC solicited input from the clean energy industry on
the impacts being experienced as a result of COVID and ideas that
should be considered to sustain critical workforces. In Hawaii, the
PUC considered how clean energy projects could meaningfully
contribute to the stateâ€™s COVID recovery.

Meanwhile, a growing number of states are opening dockets to
broadly understand the impact of COVID on customers and utilities.
Such dockets now exist in New York, Michigan, Texas and others.

Several states continue to push forward with efforts to examine
the evolving role of the utility and other market participants, and
how the utility business model should evolve in parallel.

In particular, there are a number of ongoing proceedings on

State interest in PBR is driven in part by a recognition that
the prevailing cost-of-service utility business model, which has
worked well for many years, is not as well suited to a future where
customer and third-party investments in distributed energy
resources (DERs) need to be better integrated for maximum benefit
to the system as a whole (see Trend 7 below for more information on
DERs). 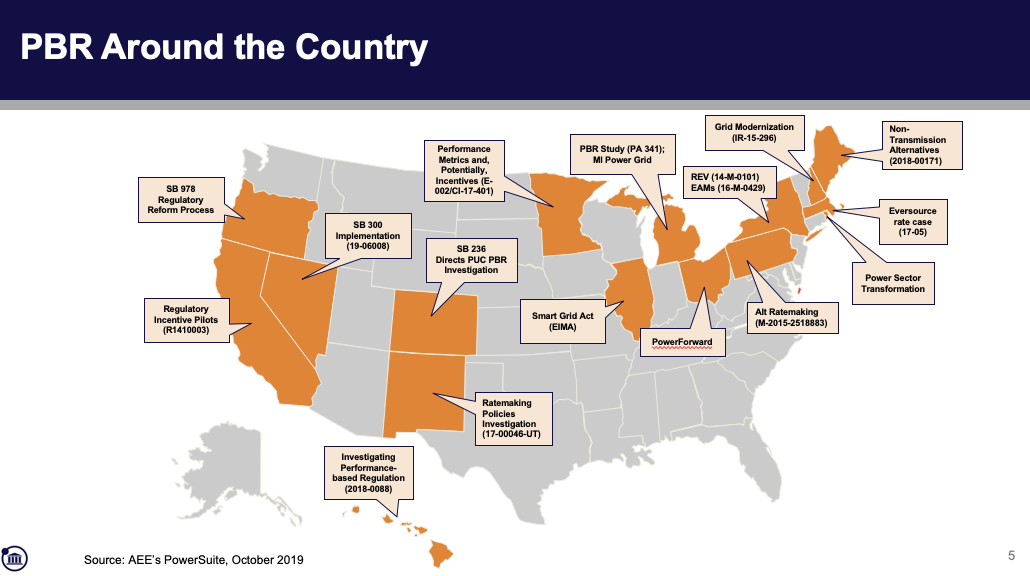 Two states are considering statewide data platforms to provide
easier access to energy use data for customers and market
participants.

4: Getting ready for electric vehicles

An increasing number of PUCs have been considering efforts to
spur investments in, and deployment of, electric vehicle (EV)
charging infrastructure. A number of them have recently
moved forward with so-called â€œmake readyâ€ programs, which
typically involve utilities offering incentives for third-party
companies to install charging stations while the utility takes care
of any necessary infrastructure up to the customer meter.

5: Self-scheduling of coal plants under the microscope

Over the past few years, the practice of â€œself-schedulingâ€
coal plants has garnered increased attention, especially in the
MISO and SPP markets.

This practice can be used as a reliability mechanism to ensure
that there is enough generation available to meet energy needs in
periods of high demand, or as a mechanism for resources like energy
storage to manage their unique operations (e.g., state of charge).
However, in states where vertically integrated utilities are able
to receive full cost-recovery through bundled retail rates and fuel
cost adjustments, many utilities have taken advantage of
self-scheduling rules to run their uneconomic coal units and then
charge ratepayers for the difference between the clearing price in
the energy market and the actual cost of running the plant.

In Missouri,
the Public Service Commission has ordered all utilities to provide
information on utility self-scheduling. In July, the Minnesota
Commission gave approval to an Xcel plan for coal plants to sit
idle for six months of the year, only used to meet summer and
winter demand peaks. In May, the Indiana Utility Regulatory
Commission decided not to review the self-scheduling practices of
Indianapolis Power & Light (IPL), but later did agree to review
Duke Energyâ€™s practices. The IURC has scheduled a hearing on this
issue for September 21 with final action expected by the end of the
year.

6: ‘Bright lineâ€™ between state and federal jurisdiction gets
blurred

The division of regulatory authority between the federal
government and the states spelled out in the Federal Power Act
(FPA), once described by the Supreme Court as â€œa bright line,
easily ascertained,â€ was anything but during the first half of
2020.

This could raise the costs of these state programs, setting up a
direct conflict between FERCâ€™s regulation of the wholesale
markets and state energy and environmental laws. Among the options
being explored is pulling out of regional capacity markets
altogether, with states taking the lead in managing resource
adequacy (see #10, below).

FERCâ€™s Order No. 841, which ensured that energy storage
resources could fully participate in wholesale markets, also got
pushback on jurisdictional grounds. States and utilities looking
for the right to â€œopt outâ€ took FERC to court, but in July the
United States Court of Appeals for the D.C. Circuit rejected their
arguments.

Just days later, FERC stuck up for state authority, albeit on
narrow grounds, when the commissioners
unanimously dismissed a Petition filed by the New England
Ratepayers Association (NERA) that asked the agency to declare
excess energy production from distributed energy resources (DER)
participating in state net metering programs to be a wholesale sale
subject to exclusive FERC authority.

In prior reviews of trends in 2018 and 2019, we identified much
regulatory activity related to distributed energy resources (DER)
and changes in distribution system planning (DSP) needed to
facilitate those DERs. In 2020, that trend continues.

Connecticutâ€™s Department of Energy and Environmental
Protection and Public Utilities Regulatory Authority have initiated
an investigation to review topics related to implementation of its
2019 Framework for an Equitable Modern Grid. The Hawaii Public
Utilities Commission is investigating technical, economic, and
policy issues associated with DER as they pertain to utilities
HECO, HELCO, and MECO. Other ongoing proceedings to address
implementation of DERs are active in California, Arkansas, and New
York.

Closely related to DERs are efforts to modernize distribution
system planning. In November, the Public Utilities Commission of
Colorado opened an information-gathering proceeding on DSP and
non-wire alternatives. Other states currently involved in DSP
include Michigan, Minnesota, Colorado, New York, and
California.

From the Eastern seaboard to the West Coast, the trend toward
100 percent clean or renewable energy has only accelerated in
2020.

Fourteen states, plus Puerto Rico and the District of Columbia,
have 100 percent clean or renewable energy targets as of 2020, with
others, such as Illinois, signaling they will soon follow suit.
Utilities from Idaho and Oregon to Minnesota and Wisconsin have
likewise made commitments to 100 percent clean energy. Regulators
in states like Hawaii, California, and Washington continue to
implement robust clean energy goals, but weâ€™ve also seen action
in in states not previously associated with clean energy, including
Virginia, with passage of the Virginia Clean Economy Act in
March.

9: The storage story, from batteries to hydrogen

The declines in the costs of batteries and hydrogen are fueling
an increasing interest in these storage technologies to provide
enhanced resilience and reliability to the grid.

Policymakers are hitting regulators throughout the U.S. with new
capacity targets for storage in 2020. Virginia, Maryland, South
Carolina, and New Hampshire are among the states with open
proceedings on battery storage.

Beyond batteries, hydrogen energy storage has increasingly been
attracting regulators and utility companies as a potential pathway
to achieve decarbonization targets.
Electrolysis costs are declining, which in turn is driving

European companies to take the lead in blending hydrogen with
natural gas for power generation or using hydrogen carriers for
seasonal storage.

Hydrogen can be used to address
â€œduck-curveâ€ issues with large amounts of solar or wind
energy on the grid. Some states, like
California are exploring setting standards for hydrogen in gas
pipelines and others are exploring alternatives to gas pathways
that include hydrogen.

Mounting state-federal jurisdictional tension (see #6 above) has
led some states to question whether resource adequacy â€” the
responsibility for ensuring sufficient resources will be available
to meet demand in a future year â€” should be returned entirely to
state control. Specifically, in regions that currently ensure
resource adequacy via centralized capacity markets (PJM, ISO-NE,
and New York), several state PUCs have begun proceedings to look
into reforming or even exiting these markets.

With the expansion of the minimum offer price rule (MOPR),
referred to in New York as buyer-side mitigation (BSM), states are
faced with the choice of paying to over-procure capacity or walking
away from their clean energy policies. This has left many states in
search of a third way.