Wildfires recently turned the West Coast into a hazy orange
hellscape, scorching a
record-breaking amount of land in California and blanketing the
whole region with lung-clogging smoke. The fires have already
burned
thousands of houses, driven Oregonians from their homes, and
killed dozens of people. And it’s not even peak wildfire season
yet.

You expect to see the phrase natural disaster all over the news
when hurricanes, earthquakes, volcanic explosions, floods, or fires
cause a lot of deaths and property damage. This fire season,
however, politicians and other people are beginning to ditch
natural disaster for phrases that are more specific — and more
accurate.

“These are not just wildfires,” Washington Governor Jay
Inslee said during
a press conference last week. “They are climate fires.”
Oregon Governor Kate Brown wrote on Twitter that her
state was experiencing an “unprecedented fire event.”

These megafires aren’t exactly “natural,” after all —
they’re magnified by the hotter, drier climate humans have
created, along with a century of forest fire suppression that left
more fuel to burn. And 85
percent of the time, wildfires are started by people — a
smoldering cigarette, an unquenched campfire, a
gender reveal party gone wrong. You could argue that even the
wild in wildfires is a bit misleading.

The supposed
“naturalness” of disasters has been questioned since the
phrase first appeared in the English language a couple hundred
years ago. Mother Nature might be behind earthquakes and tsunamis,
but the resulting disaster isn’t necessarily nature’s fault.
The problem is that we’ve built our towns and cities in the path
of hurricanes, wildfires, and floods — and governments aren’t
doing a great job of protecting those who need it most.

“There’s no question that if you live in a trailer park,
you’re much more susceptible to the ravages of a tornado than if
you live in a more stably built house,” said Priscilla Wald, a
professor of English at Duke University. The expression natural
disaster obscures the inequities in society, she said: “It’s
about denying the ways in which human beings make our world.”

In recent years,
news articles, academic
studies, and
entire books have been devoted to explaining why natural
disaster is a misnomer. A group called #NoNaturalDisasters uses
its platform to educate
journalists and call out organizations that use the phrase.
Organizations are getting on board, too: The United Nations Office
for Disaster Risk recently declared,
“There is no such thing as a truly ‘natural’ disaster.”
Last year, Greenpeace eviscerated the phrase in a viral tweet.

The expression’s popularity has slipped over the last decade,
according to
Google Ngram, a tool that tracks how often words are used in
books. “It’s used for so many things that it’s lost the punch
that it originally had,” said Kory Stamper, a lexicographer.
“And so we want punchier language. We want language that conveys
the severity of these things.”

Originally from ancient Greek, disaster meant bad star,
reflecting a belief that fate was written in the stars and that
gods punished humans through floods, earthquakes, droughts, and
more. Over the centuries, that connotation of disaster faded, and
according to Wald, the addition of natural kept the emphasis on
factors outside human control. If a tsunami came crashing ashore,
people focused on the water itself rather than the shoddily built
or unwisely located homes it destroyed.

Natural disaster first appeared in English around 1750, Stamper
said, and it didn’t take long before someone noticed its flaws.
In 1755, an earthquake and tsunami struck Lisbon, Portugal, killing
tens of thousands of people. At the time, the philosopher
Jean-Jacques Rousseau wrote that nature “did not construct twenty
thousand houses of six to seven stories” in Lisbon; if the
city’s inhabitants had been more spread out and “lightly
lodged,” he said, the damage would have been minimal. 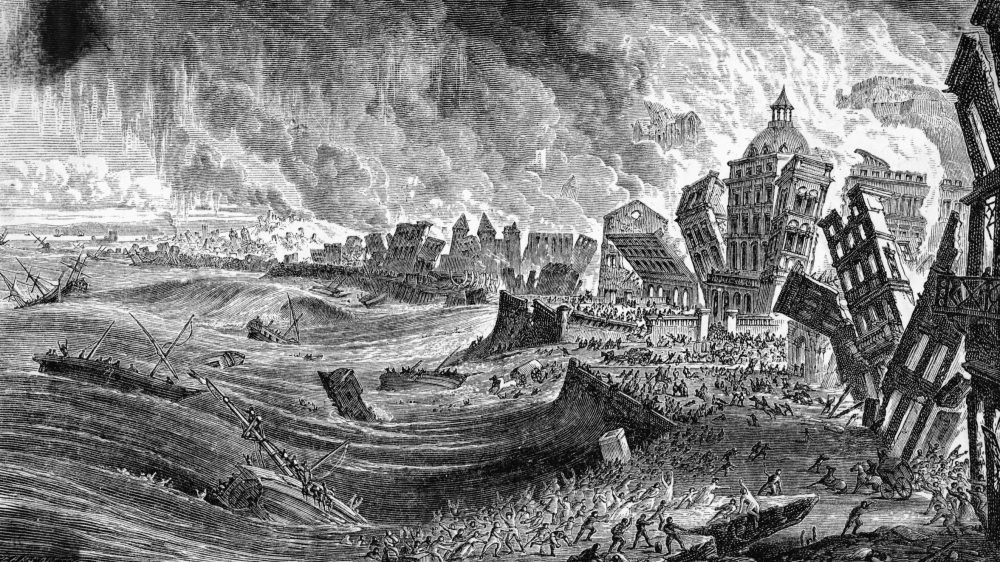 An illustration of the Lisbon
earthquake from the 1887 book “Volcanoes and Earthquakes” by
Georg Ludwig Hartwig. Bettmann / Contributor / Getty Images

The phrase was used in a weird, sporadic way for most of its
history, Stamper said, but it picked up steam in the 1950s and
later as federal, state, and local governments began putting more
resources toward addressing potential hazards — like warning
systems and building codes for earthquakes — with funding
earmarked for natural disasters. The expression’s use peaked
around the early 2000s and has remained high since, she said.

There’s a compelling explanation for why governments
popularized the phrase: It provides them with a convenient defense
if they mess up. “There are politicians who love to call them
natural because that gets them off the hook,” said Terry Cannon,
a research fellow at The Institute of Development Studies in the
United Kingdom who studies climate change and disaster
vulnerability.

Back in January, during Australia’s most catastrophic fire
season on record, Prime Minister Scott Morrison was asked if his
government’s response to the bushfires was inadequate. “There
is no doubt natural disasters are termed that way because that is
what they are — they are natural disasters,”
he said. “They wreak this sort of havoc when they affect our
country and they have for a very long time.”

Another factor: money. “There’s a lot more profit in
focusing on fighting against nature than in fighting against social
inequality,” said Jason von Meding, an associate professor at the
Florida Institute for Built Environment Resilience, and companies
and research institutions take advantage of it. “More sea walls,
better mapping or hazard monitoring isn’t going to solve those
social problems,” he said, “and yet most of our funding is
going to technological innovation.”

Increasingly, however, people are grasping the message that
disasters in nature often aren’t “natural.” In some cases,
when people use the phrase now, they do so only to explain why the
expression is wrong.

“And while [the wildfires] might easily be dismissed as a
natural disaster, they are smudged with human fingerprints,”

wrote Kale Williams, a reporter at the Oregonian, last week.
Dale Smith, a writer at the tech news site CNET, recently wrote
that “‘natural disaster’ is something of a misnomer.” A
good
number of academic articles mention the phrase simply to
critique how others have used it.

Over the last five years or so, substitutes like extreme weather
events and unnatural disaster have become more popular.
“Scientists Warn That Fires, Extreme Weather Events Are Getting
Worse,” read a headline earlier this week in Futurism, a science
and tech site. The Atlantic’s recent podcast series about the
aftermath of Hurricane Katrina was titled “Floodlines: The Story
of an Unnatural Disaster.”

“That people have started using alternate terms,” Stamper
said, “tells me that we might be more ready to move away from
natural disaster than we were 15 years ago. Back then, almost
everything was a natural disaster.”

Still, von Meding cautions that avoiding the phrase doesn’t
get at the root of the problem — the denial of human
responsibility — and it can lead people to become hyperfocused on
correcting language.

“You can say that you’re not going to use the language
natural disaster anymore, and sure, that’s a little bit of a
win,” von Meding said. “But if you’re not also talking about
power and inequity and injustice and structural violence, then are
you really solving anything, or are you just being PC?”

This story was originally published by Grist with the headline
The phrase ‘natural disaster’ is going up in flames on Sep
16, 2020.

Source: FS – All – Ecology – News 2
The phrase ‘natural disaster’ is going up in flames

Land of the birds: why Australia has the world's greatest diversity of avian life