Batteries aren’t dead when they come to the end of their
useful life in an electric vehicle.

Reused or “second-life” lithium-ion batteries still have a
lot of juice left in them, but so far using these batteries in
stationary applications has yet to gain real market traction. But
new research, growing automotive industry interest and an expanding
startup ecosystem suggests that could now finally be changing.

“There’s definitely an uptick in the number of companies that
are now trying this and getting serious about it, and I think it’s
becoming pretty clear what the main obstacles are that remain,”
said MIT researcher Ian Mathews, who recently published a study on
the economics of second-life battery systems coupled with
grid-scale solar installations. “It’s a very interesting
time.”

EV batteries are typically replaced after they lose around 20
percent of their capacity, which means that there’s still up to
80 percent capacity remaining that can be used for stationary
storage applications. Tapping into that remaining battery life has
the potential to cut costs and greenhouse gas emissions, but comes
with several challenges.

Retrofitting lithium-ion batteries for reuse requires extensive
testing and upgrades to ensure that the product will perform
reliably in its new role. The nascent second-life battery market
also needs a steady battery supply, customer demand and access to
funding in order to be successful.

Solutions are within reach, with a growing group of technology
startups and major automakers working to advance the second-life
battery segment as EV sales continue to increase.

Dane Parker, chief sustainability officer at General Motors,
said in an interview at the company’s
EV Day earlier this year that creating a circular supply chain
for EV batteries is one of the company’s central efforts to
reduce its environmental footprint. He said GM designed its new
Ultium battery pack with second-life applications in mind and is
currently working with partners to develop a business case
aroundbattery reuse.

“We actually believe itâ€™s very viable,â€ he said of
second-life batteries. â€œIf you design them with that purpose â€¦
it becomes much easier to integrate later. And weâ€™re doing that
right now.â€

Automakers under pressure to unlock value in used batteries

GM isnâ€™t the only EV maker thatâ€™s looking closely at the
second-life battery space. Nissan was one of the first major
automakers to
pilot second-life EV batteries in a grid-scale storage
installation in 2015. That same year, BMW tested used batteries in
demand response events during an
18-month pilot project in partnership with Pacific Gas &
Electric.

Automakers are â€œreally, really interestedâ€ in second-life
battery applications, â€œbecause they know they have this huge
store of value that is potentially going to come back to them when
they have to take batteries out of cars,â€ said MIT’s Mathews.
â€œThey know the cost of recycling is going to be huge for them if
they’re mandated to recycle these batteries, which they already are
in some places.â€

China and California already have EV battery recycling policies
in place or under development. Repurposing EV batteries not only
allows automakers to immediately generate additional revenue, they
can also delay when they need to take the batteries apart and
recycle the materials.

The economic case for second-life batteries

Automakers arenâ€™t the only companies paying attention to
second-life batteries. A growing number of project developers are
also starting to see second-life battery storage as a way to bring
down the capital costs of commercial- and grid-scale battery
installations, according to Mathews. This marks a shift away from
the smaller residential and off-grid battery applications
repurposed batteries were being tested in.

A study published in Applied Energy by Mathews and five
other current and former
MIT researchers concluded that lithium-ion batteries could have
a profitable second life as backup storage for grid-scale solar
photovoltaic installations, where they could operate for a decade
or more in this less-demanding role.

The study results are based on a rigorous review of a
hypothetical grid-scale solar farm in California, using real world
data on solar power availability, battery degradation and other
factors. Mathews and his co-authors determined that a system of
second-life battery installations coupled with a 2.5-megawatt solar
project would be a profitable investment if the reused batteries
were 60 percent or less than the original battery price. A separate
McKinsey analysis found second-life batteries could hold a 30
to 70 percent cost advantage over new battery alternatives by
the mid-2020s.

The same McKinsey report found that the supply of second-life EV
batteries could surpass 100 gigawatt-hours per year by 2030, with
the potential to meet half of the forecast global demand for
utility-scale energy storage in that year. 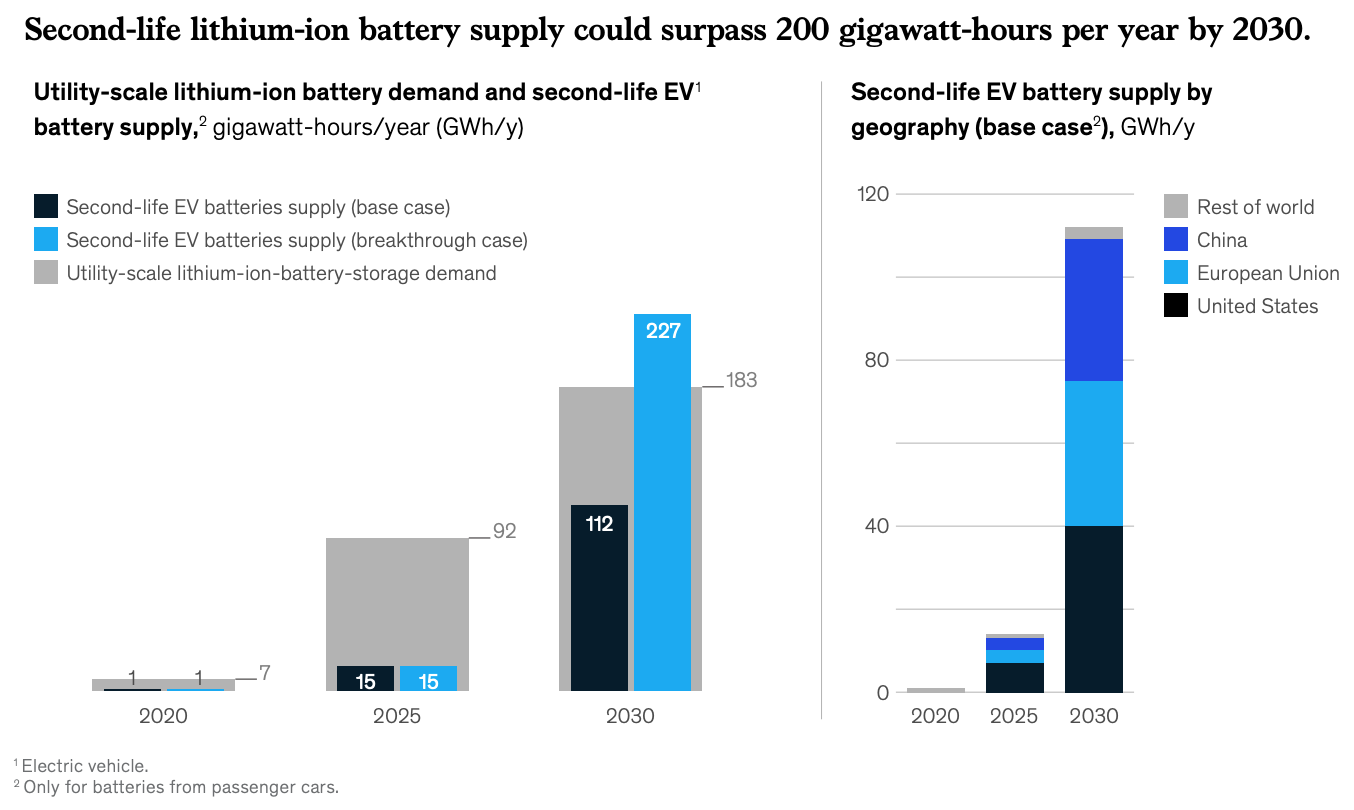 Both the McKinsey and MIT studies note several challenges in
repurposing EV batteries that must be overcome to unlock this new
pool of battery supply.
Much more work needs to be done around second-life battery
health, and the best way to control and monitor batteries from
different vehicles and models once theyâ€™re grouped together in a
new stationary pack, Mathews said. A growing number of startups are
working on ways to overcome such hurdles. â€œ[There’s] a nice
ecosystem building, but it is in early stages.”

In a step forward for the sector, California-based startups
RePurpose Energy, Smartville Energy and ReJoule each received $2-3
million in funding last month from the California Energy Commission
(CEC) Electric Program Investment Charge (EPIC) funding program to
validate their technology. All three startups previously received
funding from the CalSEED program.
â€œOur mission is to reuse batteries from electric vehicles to
store solar energy in lower cost, more sustainable energy storage
systems,â€ said Ryan Barr, chief operating officer at
RePurpose.
â€œWe can do better and need to do better,â€ Barr said of the
energy storage industryâ€™s greenhouse gas impact. â€œThat’s really
what motivates our work.â€
The mining and refining of lithium-ion battery materials, as
well as the manufacturing of cells, modules and battery packs,
requires large amounts of energy and can have significant a
environmental impact. Second-life batteries could offer meaningful
greenhouse gas emissions savings by eliminating the need to
manufacture new batteries for every application.
One market analysis, commissioned by a European clean
transportation organization, found that extending the life of a
battery in a repurposed application has the potential to cut its
embedded emissions in half.
RePurpose was born out of a decade of research at UC Davis and
is led by Professor Jae Wan Park. The startup focuses its work on
quickly and accurately disassembling EV batteries, usually from
Nissan, determining their state of health, and then reassembling
them with new controls and safety equipment.
By replacing the worst cells in the battery, it can go on to
operate in another application outside of a vehicle for up to an
additional 12 years based on RePurposeâ€™s initial calculations.
But first the bad cells have to be found. RePurpose has developed a
way to test for battery degradation in about a minute â€” a process
that traditionally takes a full day.
Safety is one of the biggest barriers to attracting more
capital into the nascent second-life battery industry. RePurpose is
also developing a â€œnon-destructive fire suppression systemâ€
that can detect an imminent battery failure and prevent the battery
from overheating without damaging any of the electrical components.
Mitigating risks to investors should help boost access to project
financing.
Professor Park raised around $5 million to develop the
technology and deploy a 300 kilowatt-hour demonstration project at
the UC Davis campus winery thatâ€™s shifting power use to offset
the facilityâ€™s on-peak energy demand. The company has since
raised another $4 million, including $3 million from the CECâ€™s
EPIC program. The EPIC funds will be used to deploy a second,
1.2-megawatt-hour demonstration project at a food
cooperative.
â€œWe aim to replicate the food cooperative demonstration all
over the state,â€ said Barr.

The diversity of EV battery packs available in the market
creates another big hurdle for processing and reconfiguring the
batteries for new applications, as it requires significant reverse
engineering even before the battery testing process can
begin.
Smartville Energy, which spun out of UC San Diegoâ€™s Center
for Energy Research, has developed a refurbishing process for
different kinds of batteries, which researchers see as critical for
enabling the technology to scale.
Rather than speed up the battery testing process like
RePurpose and other players in the space, Smartvilleâ€™s specially
designed power converters and conditioning process intentionally
slows the testing down to balance the health of the batteries
across the entire system. Because the health check involves
charging and discharging the batteries many times over several
weeks, this process creates the additional revenue stream of
selling electricity services from the batteries during the testing
process.
â€œOur control and power electronics design brings all of
those different batteries from different vehicles, makes and
models, as well as power-coupling formats, into the same modular
design,â€ said Smartville CEO Antoni Tong. â€œThen each of them is
cycled in a way that will improve their uniformity through the
conditioning process, and at the same time those operations are
synchronized with a grid service.â€
With its $2 million in EPIC funding, Smartville is currently
working to deploy its first real-world demonstration project at a
rare bookstore, which requires precise temperature and moisture
control. â€œWe often say that if we do our job right, there should
be no new batteries going into stationary storage,â€ said
Tong.

ReJoule: starting at the very beginning

ReJoule, another California startup that received $2 million
from the EPIC program, takes an approach to optimizing second-life
batteries that starts within the vehicle itself. By installing
ReJouleâ€™s technology on a new battery, the battery system can be
optimized over its entire life, allowing it to last even
longer.
â€œThe idea is that once our battery management system is
embedded in the vehicle and we have this real time state of health
measurement, it would be much easier to transition from that
first-life to a second-life application,â€ said founder and CEO
Steven Chung.
â€œWe wouldnâ€™t need additional testing, we wouldnâ€™t need
to take the battery out of the vehicle, transport that battery to a
specific test center, do the testing and then transport it to
whatever second life application,â€ Chung explained. â€œIt can be
much more streamlined.â€

Michigan’s Grid Is Not as Resilient as It Could Be. Energy Storage Can Help