Four years after the Block Island project first put wind
turbinesin American waters, the second U.S. offshore wind farm is
about to rise 30 miles off Virginia Beach, and itâ€™s happening in
the middle of a pandemic.

With two turbines, the Coastal Virginia Offshore Wind pilot is
tiny; and with a price tag of $300 million, itâ€™s very
expensive for a generation facility of its size. But Dominion
sees the 12-megawatt project as a critical stepping-stone to its
planned multi-gigawatt offshore wind empire in the Mid-Atlantic
region, says Mark Mitchell, the utilityâ€™s head of generation
projects.

After years of permitting and preparation, the installation of
the turbines and their foundations should be finished over the next
six weeks or so, Mitchell said in an interview.

The projectâ€™s major offshore components, all made in Europe,
have been waiting in Halifax, Nova Scotia, for a specialized
installation vessel to sail in. That ship arrived in Canada from
Europe on Sunday, Dominion confirms.

The vessel will transport the foundations down to the project
site and install them in the â€œlate May, early June timeframe,â€
Mitchell said. It will then return to Halifax for the pair of
Siemens Gamesa turbines, erecting them in the final weeks of
June.

Subsea cabling and other work will continue for a few more
months. By the end of 2020, Dominion will join Deepwater Wind (now
Ã˜rsted) as one of just two developers to drag a U.S. offshore wind
project over the finish line â€” and the first to do so in federal
waters.

A tiny project in a market obsessed with scale

One of offshore wind’s most important attributes is its scale:
skyscraping turbines, horizon-filling projects
and multi-billion-dollar price tags that make even infrastructure
funds blush.

Since the 30-megawatt Block Island went up, most U.S. projects
have followed Europeâ€™s lead in going very big. Vineyard Wind,
which could follow the Virginia pilot as the third U.S. project,
will be built in two 400-megawatt installation seasons. Dominion is
already working on its own follow-up:
a 2.6-gigawatt project to be built in three phases in
2024-26.

In contrast, the Coastal Virginia pilot is a minnow. And at an
estimated $300 million for a 12-megawatt facility â€” excluding
financing costs â€” the project’s price tag has raised eyebrows and
drawn concerns, including
from Virginia’s regulators. The cost will be passed on to
Dominionâ€™s ratepayers.

The high cost of Dominion’s pilot, both on a per megawatt
installed and per megawatt-hour generated basis, reflects the
project’s small size and the immaturity of the U.S. offshore wind
market. There is no local supply chain to speak of today, let alone
a competitive one.

The turbines were manufactured by Siemens Gamesa in Denmark
and the foundations by EEW in Germany. Dominion made several
unsuccessful attempts to get competitive bids for the engineering,
procurement and construction work, according to a regulatory filing
(PDF).
Eventually it awarded the EPC job to two vendors without competing
bids: Ã˜rsted is handling offshore construction, and L.E. Myers the
onshore work.

Denmark’s Ã˜rsted, the world’s leading offshore wind developer,
is not generally in the business of building projects for other
companies, but Dominion’s EPC job came with the exclusive right to
form a strategic partnership for the 2.6-gigawatt project to
come. 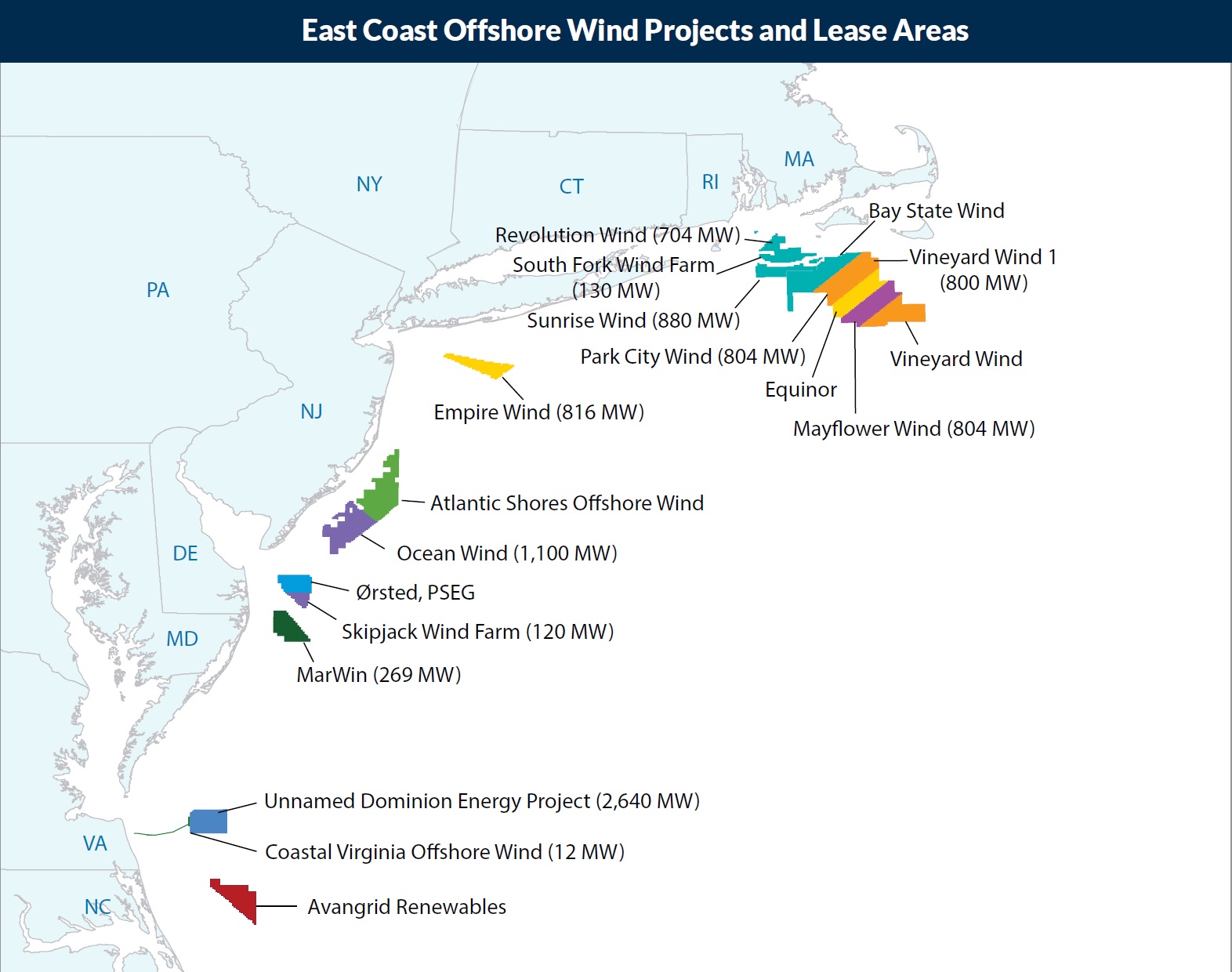 Mitchell argues that the two-turbine demonstration was a prudent
step before leaping toward gigawatts worth billions. Dominion knows
how to build lots of things, but offshore wind is a new chapter. “I
can’t just send somebody out to check on a turbine.”

The value of the pilot has come on several fronts,
Mitchell said. To begin, both the Bureau of Ocean Energy Management
(part of the Department of Interior) and Dominion had to learn what
it meant to permit an offshore wind farm in federal waters. â€œWe
both were setting precedents in a lot of cases.” Two
dozen gigawatts of offshore wind is set to follow Dominion through
BOEMâ€™s process over the next decade. â€œFrom start to finish,
weâ€™ve had a front-row seat as the first one to do it.”

Meanwhile, the pilot’s location adjacent to Dominion’s larger
project site means much of the permitting and subsea survey work
done so far will be useful for the bigger wind farm to come. And
when the pilot’s two turbines are up and spinning later this year,
they will offer real-world production data that Dominion can use to
plan its future projects.

Even before the first turbine goes up, â€œweâ€™ve already
learned a tremendous amount about offshore wind,” Mitchell
said.

The Coastal Virginia pilot will also get wheels spinning in the
local supply chain in a way that could pay dividends when it comes
to Dominion’s bigger project.

Dominion is counting on an increasingly localized supply chain
to help drive down costs at future projects, and the
utility believes Virginia could emerge as a major offshore wind
manufacturing and logistics hub, Mitchell said. Virginiaâ€™s
recently passed Clean
Economy Act, which requires more than 5 gigawatts of offshore
wind by the mid-2030s, strengthened the case for that future.

If the installation vesselâ€™s back-and-forth pathway between
Nova Scotia and Virginia sounds extremely circuitous, thatâ€™s
because it is. The Jones Act, a notorious 100-year-old law, means
that goods shuffled between American ports can only be carried by
U.S.-flagged vessels. But there are no offshore wind installation
vessels waving American flags today, leaving Dominion to park its
components in Canada during the construction process. 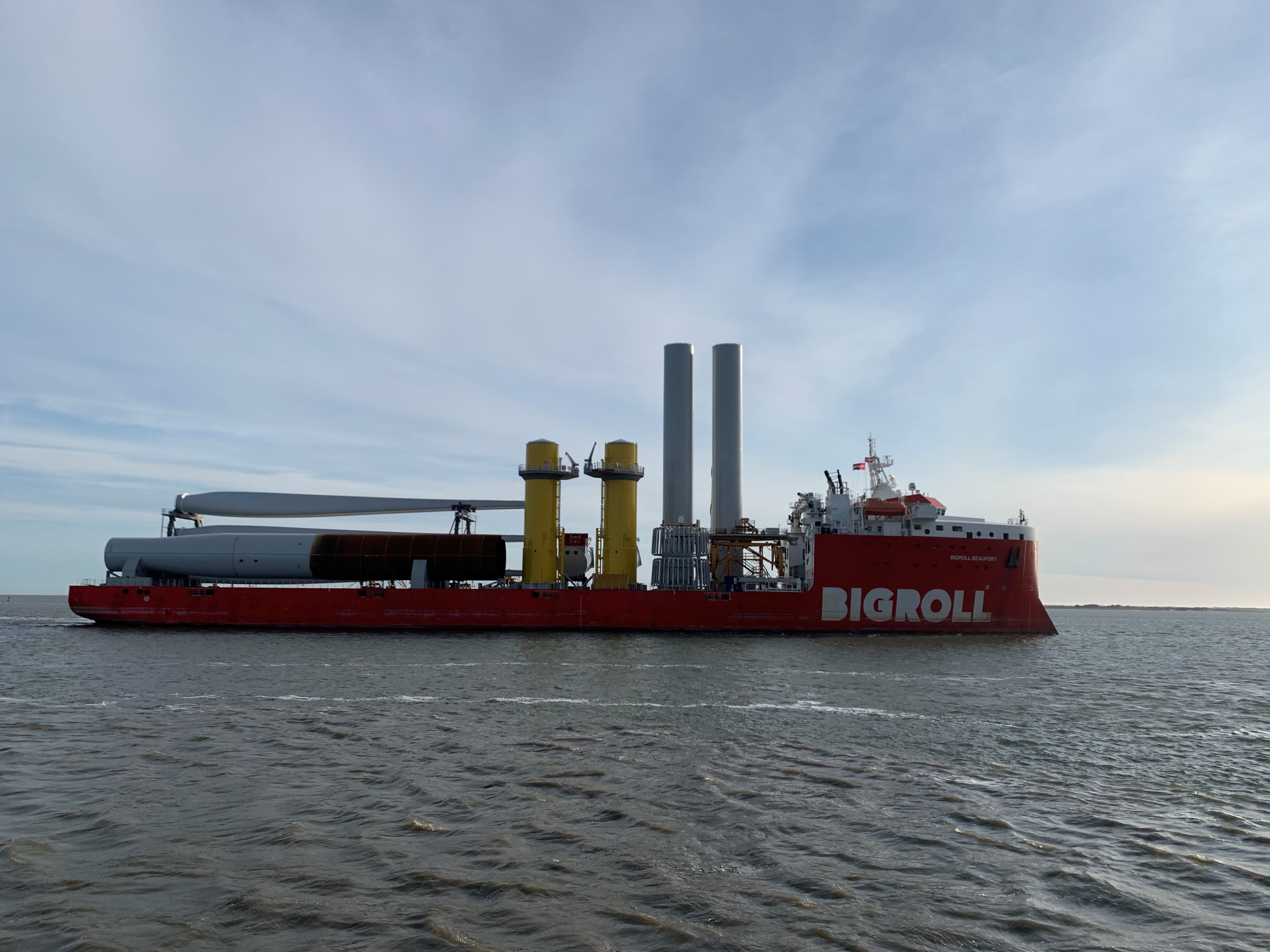 In a big step for the market, Dominion recently confirmed plans
to join a consortium of investors that will build the
first U.S. offshore wind installation vessel, expected to be in
service in 2023.

Such a vessel, likely to cost several hundred million
dollars, is an unusual investment for an American power utility. In
addition to Dominionâ€™s own wind farms, the vessel will contract
with other projects. CFO James Chapman told investors earlier this
month that Dominion expects to make â€œinfrastructure-style
returnsâ€ from its stake.

After studying the European market, Dominion determined that
having such a vessel to call upon was the “lowest risk, least cost”
option as it prepares for its multi-gigawatt buildout, Mitchell
said.

A Siemens Gamesa factory in Virginia?

Siemens Gamesa, based in Spain, made waves earlier this year
when an executive said the company was â€œactively consideringâ€
building a factory in Virginiaâ€™s Hampton Roads region.

A Siemens Gamesa spokesperson told GTM the company is looking at
ways to support local offshore wind content in “various states,”
adding that “blades have been the primary focus of our
investigations in Virginia.” The company has not made any final
decisions about “whether or where certain elements of the supply
chain might be located,” the spokesperson wrote in an email this
week.

Siemens Gamesa, which will supply turbines for Dominion’s
2.6-gigawatt project in addition to the pilot, this week launched a
new 14-megawatt
offshore turbine model, the world’s largest.

Mitchell says the stars are aligning for production
facilities in Virginia. The state already has a significant
workforce engaged in the maritime economy in the Norfolk/Hampton
Roads area, where the Navy has a large presence.
Compared to New England and other states to the north, Virginia
has lots of potential space for offshore wind factories and none of
the overhead restrictions â€” like bridges â€” seen in states like

â€œVirginia started with a fairly good advantage. Then we came
along with whatâ€™s currently the largest offshore wind project in
the U.S.,” Mitchell said. “I think the combination of a good
workforce, the physical attributes of the port, and a large anchor
project sitting there really makes [Virginia] attractive as an
offshore wind hub.”

A gap of several years will separate the Coastal Virginia pilot
and the much larger project to come, but that doesn’t translate
into a lull for Dominion’s growing offshore wind team. Work on the
larger project has been ramping up for a year or so, since before
it was made public, Mitchell said. Dominion intends to file its
Construction and Operations Plan, a key permitting document, later
this year.

Four years is not a lot of time to plan, permit and build the
first phase of a multi-gigawatt offshore wind farm, especially in
the nascent U.S. market. “Every day is critical for that commercial
project,” Mitchell said.

The Challenge of Scaling Up Energy Retrofits for Buildings