Rising economic nationalism in the U.S. and China is dominating
news headlines and making waves across the global economy. Less
appreciated is the threat it poses to the energy transition.

Already a dim prospect, the odds of keeping global warming to 2
degrees Celsius are getting darker as a result of the deepening
trade war, according to Wood Mackenzie. The consultancy’s latest
Energy Transition Outlook (ETO) holds to 3 degrees of global
warming as its baseline outcome.

Rapid and transformational change is in store for the global
energy system over the next two decades, particularly in the
electricity sector. But with 2 billion people lacking reliable
electricity access, and the population still growing, total energy
demand will continue rising to at least 2040, WoodMac expects.

Global emissions look set to plateau — though not yet fall —
in the 2030s. The ETO stands behind its previous prediction of a
peak in oil demand in 2036, despite growth in the electric vehicle
market.

Among various factors that could put the brakes on a warming
planet, few are as critical as a cooperative relationship between
the U.S. and China, said David Brown, Wood Mackenzie’s head of
markets and transitions for the Americas.

On that front, however, things have not been going well.

At the time the Paris Agreement was negotiated in 2015, there
was a feeling of momentum toward global cooperation on climate
change.

“There were certainly still hurdles, but everyone had the
sense that the two largest emitters would fight through some of
those roadblocks, do more on sharing ideas on how to decarbonize,
and potentially support investments in lower carbon fuels,” Brown
said in an interview.

“The cooperation sentiment has really eased off as a result of
the trade war,” he added, with the U.S. and China now
“deprioritizing decarbonization” at the strategic level.

For the energy transition, the risk from the trade war comes on
several fronts.

First is the negative impact on global economic growth, which in
turn makes it more difficult for political leaders to push
aggressive decarbonization agendas.

Despite a booming stock market, the U.S. Federal Reserve this
week lowered interest rates for the first time since the Great
Recession. China’s economic growth has slowed to a multi-decade
low, and both countries increasingly appear to be digging in for a
protracted trade war.

“The major priority in China is continued economic growth and
stability,” Brown said. “If the trade war continues, and it
drags on economic growth, it could impact their decision
making.”

Meanwhile, the rise of protectionism, exemplified by the Trump
administration’s “America First” approach to foreign policy,
is making lower-carbon options more difficult or expensive for some
countries.

On the renewables front, the U.S. has imposed tariffs on most
types of imported solar modules, and
newly proposed tariffs on wind turbine towers could undermine
project economics just as the wind market enters what is expected
to be a historic boom period. By the end of 2019, WoodMac expects
the overall U.S. tariff rate to be near 4 percent, a level not seen
since the mid-1980s.

The impact of protectionism on decarbonization reverberates far
beyond the energy industry. Take steel production, which is
intensely competitive, inherently difficult to decarbonize and has
“national champions” in many countries. Steel accounts for 9
percent of global emissions.

“Who will be willing to create ‘green steel’ first when
the returns are not visible?” the ETO asks. 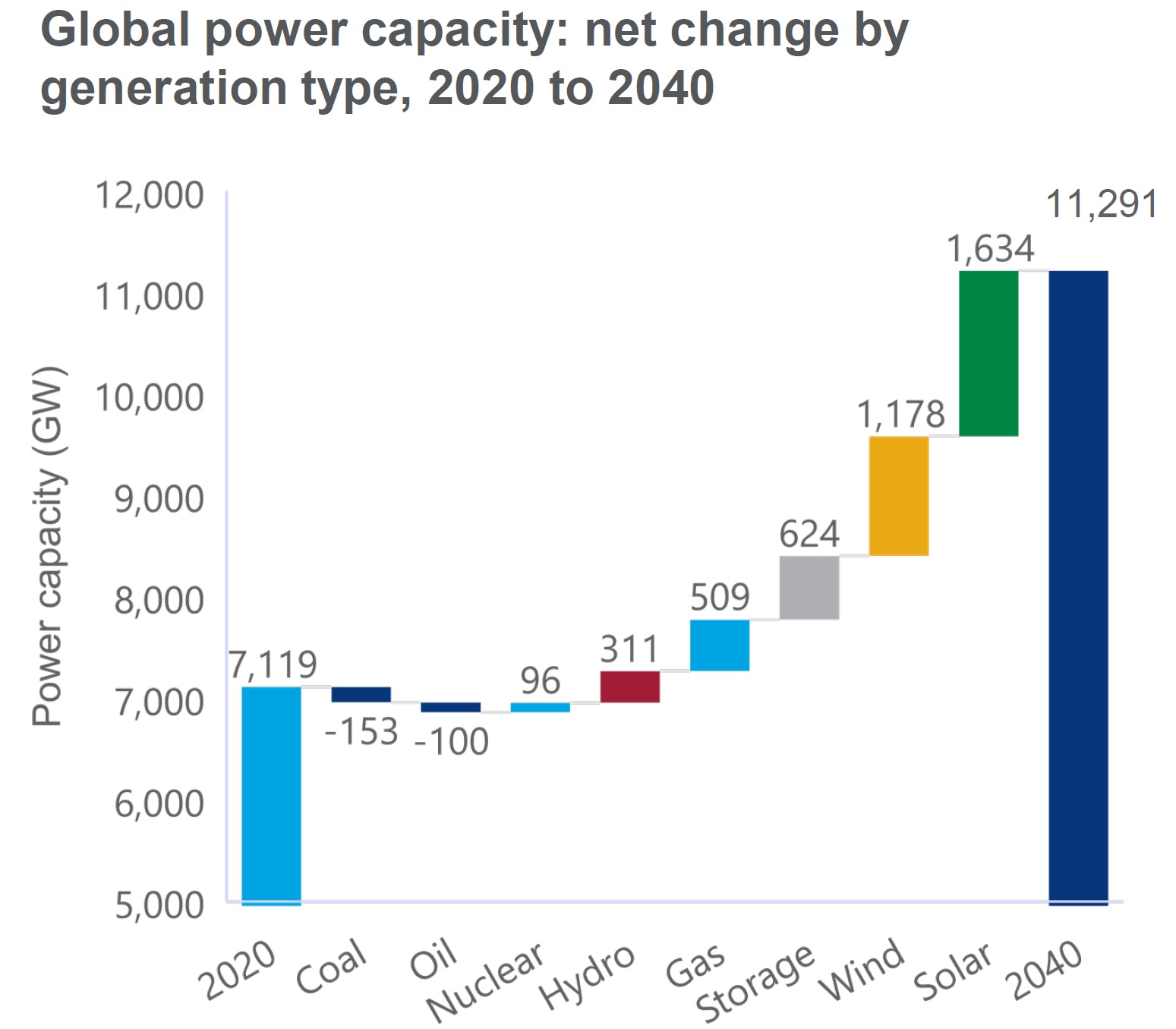 The 100-page ETO digs deep into a range of industries and
commodities, from renewables and fossil fuels to automobiles and
mining.

But the report highlights many of the reasons why keeping global
warming to 2 degrees will be so difficult. Decarbonization is
moving slowly outside the power sector, with “little to no
progress” made in carbon-heavy industries like aviation, shipping,
housing and agriculture.

Coal’s share of the world’s electricity output peaked at 41
percent in 2014, but amid persistent demand in places like India it
will still stand at 25 percent in 2040, Wood Mackenzie
predicts.

Put together, coal, gas and oil will account for 85 percent of
the world’s primary energy supply in 2040, down only modestly from
90 percent today.

Later this year WoodMac will update its alternative energy
outlook for a “carbon-constrained” future, which looks at what it
would mean to hold global warming to 2.5 degres.

Is there money in the Energy Transition?

Another factor that could speed up the energy transition is an
embrace of low-carbon technologies by the world’s most
sophisticated hydrocarbon companies. Aside from a few European
players, however, there is little evidence of that happening in a
meaningful way.

The ETO delves into the obvious problem: It’s not at all clear
that there’s as much money to be made in renewables as in oil and
gas, at least not right now.

The difference in returns on investment into various types of
energy projects tracked by Wood Mackenzie is striking — running
from around 5 percent for solar projects up to 30 percent or more
for North American onshore oil.

The reality, WoodMac’s Brown noted, is that building and
operating wind and solar farms is quite different than the oil
business — “totally different assets, with different
monetization strategies.”

“The market is kind of forcing them together, in the sense
that some investors are asking oil and gas companies about their
low-carbon business strategies.”

“But it’s a real challenge because the core obligation for
these companies is to their shareholders,” Brown said. “They want
robust and healthy returns, and those come from oil and gas right
now.”

Was 2017 the Year Global Energy Giants Went All-In on the Distributed Energy Revolution?

Coming Soon to an RTO Near You: Google

Trump Targets Chinese Wind, Battery and EV Imports, but With Limited US Impact