A coalition of industry, power and oil and gas firms
in the U.K. are collaborating on a net zero industrial cluster
that they believe will establish a template for any country seeking
a carbon-neutral economy.

Earlier this year, the U.K. became the first major
economy to set a net zero by 2050 target. But concrete proposals
on how the country could get there are few and far between, with
Brexit and (yet) another election dominating the political
agenda.

In the meantime, the private sector is busy making its
own plans, and the most advanced proposal so far was presented
earlier this month.

Enter Drax.
The company used to be best-known for running the Drax Power
Station, a 4-gigawatt coal-fired plant in the north of England.
Today 2.6 gigawatts has been converted to biomass. The Drax
Group has a spinoff in the U.S. producing wood pellets, pumped
hydro and a pipeline of gas power plant developments.

This mixed fuel
power complex on England’s east coast is at the heart of an
early proposal to send the U.K. on its way toward a net zero
economy. Its biomass generators will be connected
to carbon capture, utilization and storage (CCUS) technology.

Meanwhile National Grid,
which runs the U.K. power transmission network and gas distribution
grid, will create a regional CO2 network offering industry and
petrochemical complexes down the Humber river the chance to feed
into the pipe. At that point Norwegian oil and gas
major Equinor gets involved, providing a long-term home for
that CO2 in the North Sea.

In tandem, the negative emissions electricity at Drax
will create hydrogen that will be distributed down the Humber
industrial cluster via a new network to be developed by National
Grid. 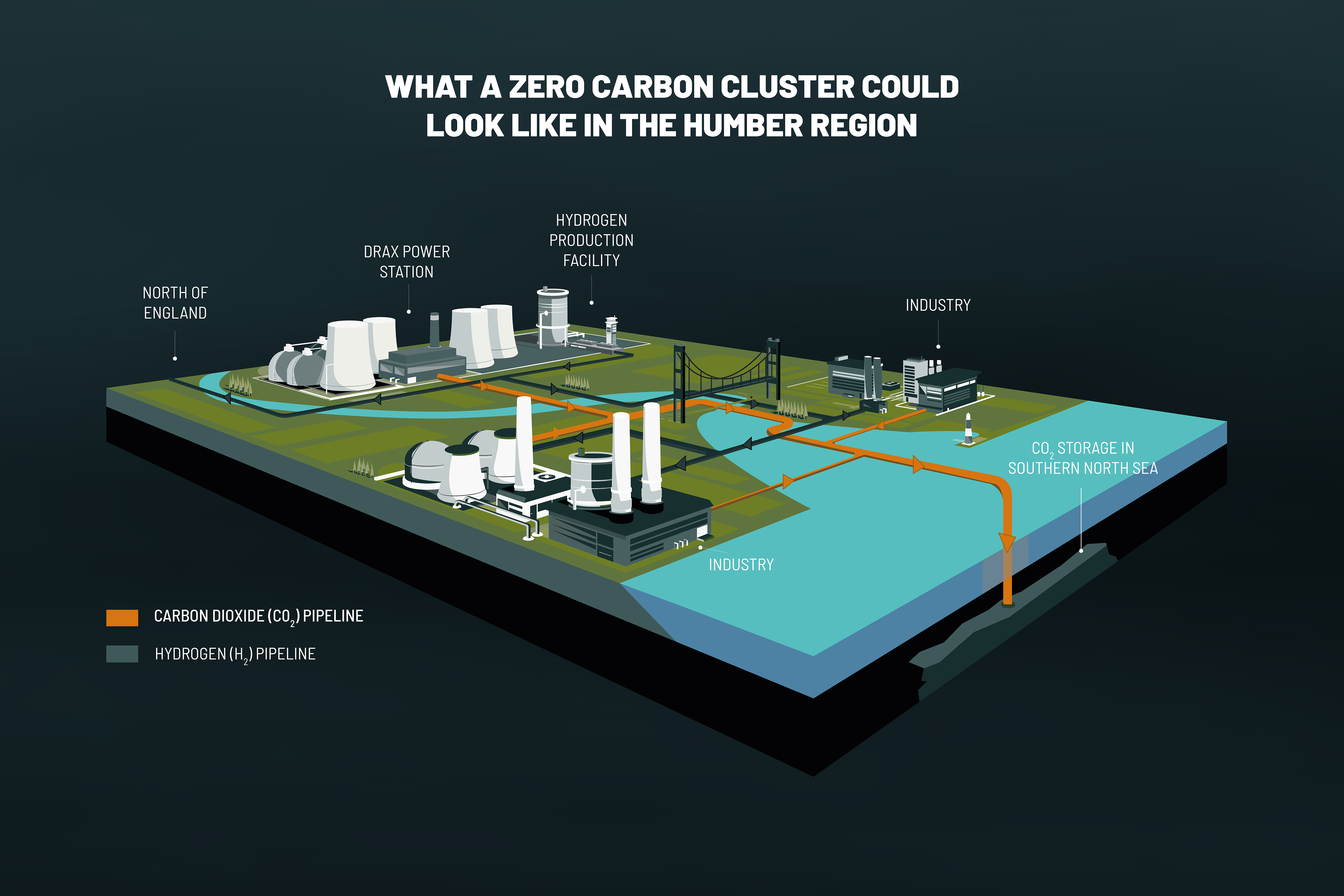 The timelines for the
project, particularly the CCUS component, could be shorter than
expected.

In the first half of
this decade a concerted effort to get the technology up and
running in the U.K. ultimately failed. Then the government spent
£100 million ($129 million) helping potential projects develop
with two making making it to the final stages of
predevelopment.

Despite the plug being
pulled on both, the companies involved (Drax, Shell, and the
utility SSE to name a few) laid a lot of the groundwork.
Drax completed the front end engineering design for the White
Rose project, a new-build coal plant that could have achieved 90
percent capture.

Having worked on many of
those projects, National Grid Venture (NGV) is ready for
another crack at the whip.

“NGV has a strong
knowledge and expertise in this area, having developed multiple
U.K. CCUS projects over the last decade, including Longannet, Don
Valley and White Rose,” the company said in a statement emailed
to GTM.

“By utilizing our
previous knowledge, NGV has also developed the Endurance store —
a saline aquifer located 90km off the east coast of England in the
Bunter sandstone formation in the southern North Sea. It is ideally
situated to facilitate CCUS developments in the Humber region
and could potentially be used by other cluster developments, such
as Teesside in the north east of the U.K. or Rotterdam in the
Netherlands.”

If good projects with
strong support from industry and government could not get off the
ground five years ago, what has changed?

Emrah Durusut is an
associate director of Element Energy, the consultancy firm hired
by the Zero Carbon Humberside partnership to analyze the
proposals. “Five years ago, we still had a good project
proposals, like White Rose and Peterhead. But in terms of the
narrative about CCS and the value proposition, we were discussing
the wrong things,” he told GTM.

“We were
trying to focus on the wrong aspects of CCS and people were
still discussing renewables versus power with CCS. It’s not a
very useful discussion; we need both and we know that now,”
Durusut said.

“Today, we’re talking
about more exciting things. Things around industrial
decarbonization for example and CCUS has a vital role to play in
that.”

He points out that some
sectors, like cement and steel, rely on processes that don’t
have low-carbon alternatives, so offering a capture option is
essential.

Other
industrial clusters are looking at their options, too, and while
not all have the luxury of an existing gigawatt-scale biomass plant
on their doorstep, there are other routes to negative
emissions. Biogas — with CCUS — can be applied in the
power sector, or at smaller industrial scales in place of natural
gas.

The
influential Committee on Climate Change, the U.K. government’s
independent advisor, produced a report on what net zero by 2050
means. They estimate 5
gigawatts of bioenergy paired with carbon capture will be
needed across the U.K. by the target date They also recommend that
in the longer-term, industry should only be using biomass if it is
pairing it with CCUS.

With ambition on
emissions reduction raised from 80 to 100 percent by 2050, CCUS
is considered an essential industry. Hitting this target across
all sectors is where the second major component of the Humber
plan comes in.

While gas has
been championed by many in the power sector, Durusut said
natural gas is simply not good enough for net zero. Hydrogen can
have a role to play in transport, heat and industry.

The Zero Carbon Humber
plan proposes the construction of a major hydrogen production
facility next door to the Drax power station. Drax recently got the
nod to develop 3.6 gigawatts of natural gas and energy storage at
the same location as the biomass station. It could produce
hydrogen from natural gas, with the CO2 sent for storage and the
hydrogen distributed via NGV’s dedicated grid.

The hydrogen would then
be used for some of the trickiest sectors to decarbonize, heat,
heavy transport and industry.

Equinor predicts
it could heat
3.7 million homes using hydrogen, derived from its natural
gas, via a 12-gigawatt production facility. By its calculations,
if the CCUS were in place on time that would be 3.7 million homes
getting zero carbon heating by 2034.

Picking up the tab

So who pays for all this,
and how?

Decarbonization in the
U.K. power sector has thus far been achieved through intervention,
most notably through the Contracts for Difference system, with the
costs recovered through energy bills. But for industries like
steel, prices are set internationally. If costs go up, such
industries will find somewhere else to operate and take their jobs
with them.

Retaining jobs in heavy
industries that would otherwise shift overseas is a big incentive
for the economy. To keep such jobs, Durusut argued, those
industries will need the tools to decarbonize — namely, hydrogen
and CCUS.

“Five different areas
will require specific business models with specific potential
incentives to make it work,” he said. The most pressing is
getting CCUS storage in place for the power sector.

Durusut believes the
best option could be using an existing mechanism, the Contracts
for Difference incentive.

“[CfD] already exists
and it was a reason why renewables production has been proven
successful,” he said.

Durusut suggests the CfD
incentive being initially offered to natural gas power plants
providing baseload with CCUS, with a plan to recover their costs as
the load factor of these plants falls, more renewables
come online, and gas principally becomes used for
flexibility.

A meaningful carbon tax
would also have an essential role in the emerging business cases
underpinning this reimagination of heavy industry.

While many long-term
targets dissolve as governments come and go, the political tide
would suggest the U.K’s net zero target is going nowhere.
The country’s next government will be the first asked to lay the
foundations for Zero Carbon Humber and other initiatives that
follow.

The Focus Is on the Model 3. What’s Going On in Tesla’s Storage and Solar Businesses?